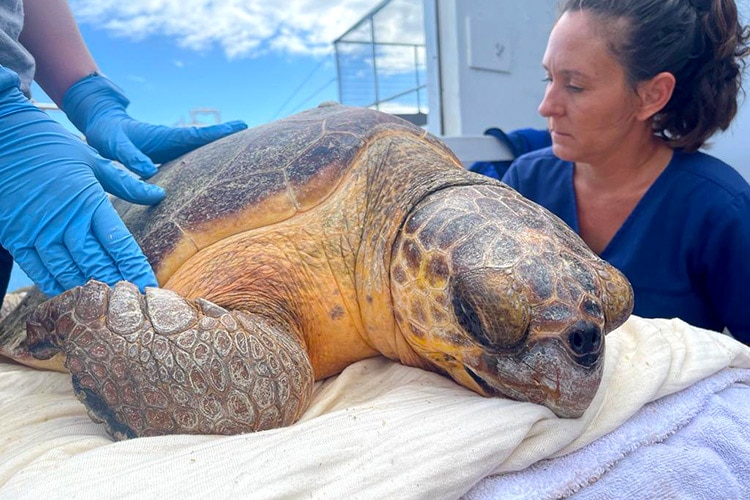 On March 24, an injured loggerhead sea turtle was rescued by volunteers from the Sea Turtle Assistance and Rescue (STAR) network in collaboration with the US Fish and Wildlife Service, Division of Fish and Wildlife of the VI Department of Planning and Natural Resources, and Coral World Ocean and Reef Initiative (CWORI).  The turtle was first spotted at the Frederiksted Pier on St Croix in late February.  Experts from the Animal Welfare Center on St. Croix, who were monitoring her recovery, determined after four weeks that she was not progressing as well as hoped.

On March 25, QE4 Ferry Service transported her to St Thomas where STAR volunteers drove her to Coral World Ocean Park.  There CWORI Rehabilitation Manager Erica Palmer took charge. Palmer said, “We gave this young female turtle antibiotics, pain medications, anti-inflammatories as well as fluid therapy. Based on x-rays and ultrasound images we determined that the injuries were caused by a shark attack.”

The turtle, which weighs 93 pounds, is receiving medical-grade honey therapy in addition to normal wound care.  Palmer went on to say, “her blood values are positive, and she is already eating. All very positive signs and even though she is missing 80% of her right front flipper, she will still be releasable if she continues to do well and heals appropriately.”

Claudia Lombard of STAR noted “Like all sea turtle species, Loggerhead sea turtles, like all other sea turtles, are protected by the Endangered Species Act. By-catch in commercial fisheries, loss of nesting habitat due to coastal development, and historical harvest of sea turtle meat and eggs have all played a part in the decline of this species.”

All sea turtles are designated as either threatened or endangered under the U.S. Endangered Species Act of 1973.  Violations can result in up to one year in prison, up to a $100,000 fine, and the confiscation of any equipment used during the criminal act.  Palmer emphasized, “STAR relies on many community volunteers, local veterinarians, and other donated resources like those offered by Coral World Ocean Park, but the most important participant in STAR is you!  Please report any entrapped, disoriented, sick, injured, or dead sea turtle by calling the rescue hotline at (340) 690-0474.  You can find out more about STAR at STAR-Sea Turtle Assistance and Rescue.”

CWORI is a 501(c)(3) U.S. nonprofit, tax-exempt charitable organization.  CWORI is dedicated to conserving marine habitats and wildlife through rescue, rehabilitation, restoration, research, and empowering others with public education. Its emphasis is on combatting coral disease and restoring coral reefs, the rescue and rehabilitation of sea turtles and birds, and marine mammal research.  For more information visit www.cwori.org

STAR is a non-profit organization whose mission is to promote sea turtle-friendly practices and a conservation ethic on land and at sea in the US Virgin Islands, and respond to incidents of injured, disoriented, or imperiled sea turtles through rescue and rehabilitation.  This collaboration of NGO’s, territorial and federal agencies, veterinarians, and community volunteers have joined together to provide education and assistance for stranded sea turtles in the territory. You can find out more about STAR at STAR-Sea Turtle Assistance and Rescue